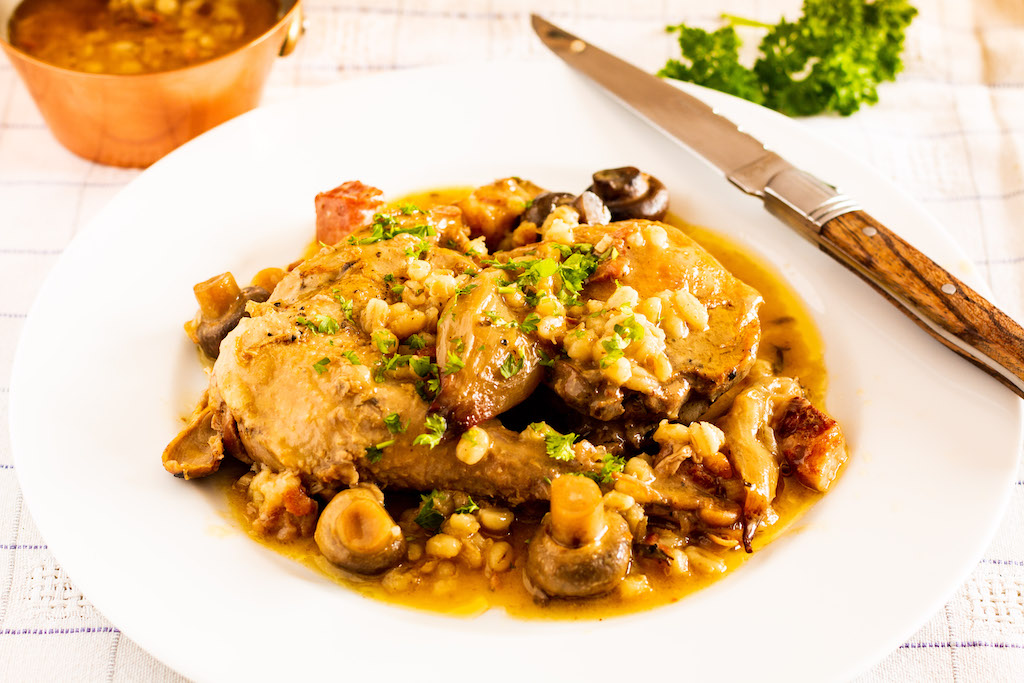 The common pheasant, sometimes known as the Mongolian ring-neck, has the scientific name Phasianus colchicus. The species name is taken from the ancient Black Sea kingdom of Colchis, which is now engulfed by modern-day Georgia. The bird carries the name of the city because it is there that Europeans first became acquainted with the common pheasant.

Common pheasants are very easy to breed, and they can adapt to many different environments, so it is unsurprising that the Romans would capture, transport, release and rear pheasants all over their Empire, up to, and including Britain.

Once the Roman Empire had dissolved, Britain found itself in the post-Roman multi-cultural society of Angles, Saxon, Vikings, Gaels and left-over Romans. At the top of the noble food chain was King Harold, who goes on account for providing canons of Waltham Abbey with pheasants in lieu of his usual supply of partridges. This is the first written record of pheasants in England, and it dates to 1059AD. 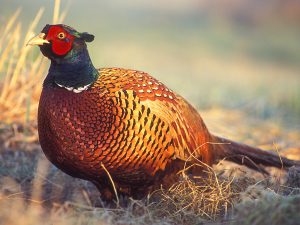 Of course, any scholar of British history will know that 7 years after that shipment of pheasants, King Harold took an arrow in the eye in the final, brutal clashes of the Battle of Hastings in 1066AD. The victorious Normans conquered England, and brought with them a deep love of pheasants, and stringent conservation laws to ensure their continued survival for the table. Records of the time are predominated by descriptions of pheasants being eaten by senior clergy. In 1465, Neville, Archbishop of York, is reported to have held one hell of an inauguration banquet. Alongside the 200 pheasants, the greedy little priest served his guests 12 porpoises and seals, 104 peacocks, 400 swans, 500 stags, 2,000 geese, 4,000 ducks and six wild boar – with all the trimmings.

You can read a very detailed, era-by-era account of the history of the British pheasant in a 2015 article by Michael Yardley in The Field. More important is to bring the story up-to-date with the current state of pheasant rearing in the UK. In the main, pheasants are traditionally collected on a driven shoot. This is conducted on land that is cultivated to preserve the field margins and coppiced woodland that provide a sheltered habitat for the birds. The woods are stocked with grain feeders, and in the cold days of winter, beaters will walk up the woods making a right old racket to startle the birds into the air and within range of the guns standing in the surrounding fields. I have been on quite a few pheasant shoots over the years, both as a beater and a gun, and have had a thoroughly enjoyable time. 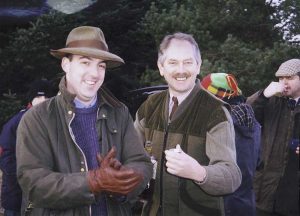 Nigel with ‘The Arbuckle’ enjoying a pre-shoot sloe gin at the Cushnie shoot, Aberdeenshire, Scotland

In recent years, there has been a move from the eating of red meat to the consumption of lighter meats, and this has led to a resurgence in the consumption and production of game. Intensive farming of pheasants is now common, and the birds are supplied chiefly to shooting estates and restaurants, with a smaller proportion reaching supermarkets and other domestic meat suppliers.

However, pheasant farming and shooting does not come without controversy. There are sectors of society who view the entire practice as cruel, and they question many of the conservation requirements that support the maintenance of a viable shoot. The League Against Cruel Sports offers an unreferenced figure of 100,000 pheasant shot per day in the UK, and point to problems in the farm rearing of pheasant whereby there is no minimum placed on the size of cage used to house the birds. They are also concerned about the trapping and shooting of animals and birds that can affect the number of pheasant chicks born in the wild. These creatures include protected species of raptor, foxes, stoats and mountain hares. In August 2017, BBC’s Countryfile caused a social media shitstorm when it included a segment chef Tom Godber-Ford Moore‘s passion for shooting and preparing game for the table. However, on looking at some of the comments, many are from people who just can’t handle knowing where their food comes from. More worrying for me is the possibility that some shoots are breaking the law on predator conservation, and may bring down the entire industry. That would be a tragedy for not only food variety, but also for the rural economy and overall look of the British countryside.

These days, I live many miles from Aberdeenshire, and am no longer connected with the regular shooting crowd. I was therefore delighted when my friend Lt. Col. Jim T offered me a brace of birds he had recently shot on a shoot in the Peak District. When preparing pheasants from whole birds, you need to make a decision – roast or braise. If you are going to roast them, then you will have to pluck off all the feathers and pull out the guts. If you are going to braise them, then the process is way simpler. You just snip up the breast skin, expose the breast meat, carve it off (a process known as ‘breasting’). You can then cut off the feet and can pop the legs out, which automatically skins them. The wings of a pheasant are worthless for cooking. For me, if I really want a roast pheasant (which is not often), I will buy a dressed bird from a butcher. If I am faced with a whole bird, I prepare it for braising as described. 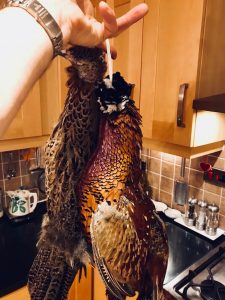 A brace of Peak District pheasant, supplied by Jim T

For the recipe given here, I have combined seasonal pheasant with apple ingredients to create a light casserole, which is a far more enjoyable way to cook and eat pheasant than going for a tricker roast. Roasting can result in a dry bird unless the breast is wrapped in bacon, and this does not do for non red meat eaters. The recipe does include bacon lardons, but these can be braised in stock separately, and added to the plates of those who do not mind eating of the swine. Pearl barley is added in acknowledgement of the feed given to the woodland pheasants.

The pheasant season in England, Wales and Scotland runs from 1 October – 1 February, closing a month earlier in Northern Ireland and the Isle of Man.

Deglaze the pan with the calvados, and light it. Once the flames have died, add the meat back to the casserole, pour in the cider and stock, and add the thyme, bay and mushrooms. Bring the casserole to a simmer, and place in the oven for 2 hours. 40 mins before the end of the cooking time, add the pearl barley to the casserole and stir in.

Once the birds are done, remove all the ingredients except the barley (you can wash the barley off the joints with a ladle of the liquor) to a serving bowl, and and fish out and discard the bay leaves and thyme stalks. Combine the flour with the softened butter to create a beurre marnie. Put the casserole back on the heat and bring the liquor to a simmer. Gradually whisk in small amounts of the beurre marnie until the sauce is thickened to your liking and the barley is cooked through – you may not use all of the beurre marnie as the barley will also thicken the sauce a little. Adjust the seasoning, and pour the sauce back over the cooked ingredients.

Garnish with parsley and serve.

If you have a non red meat eater, you can prepare the bacon lardons separately and braise them on their own in a pan, adding them back to the plates of any diners who do not eat red meat. For Christmas Eve 2017, we cooked an apple side dish for this by peeling Braeburn apples and creating apple balls with a melon baller. These were poached in mulled wine for 8 minutes. 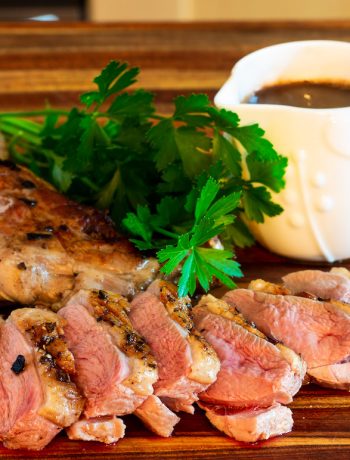 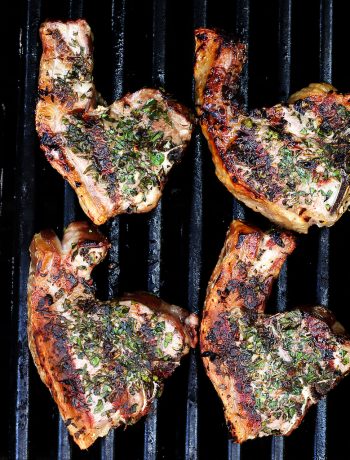 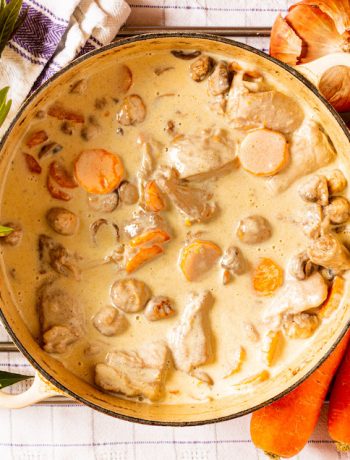